Check out the great new poster and get the details on the new Marvel short after the jump!

The first poster hit this morning for the Short that will be attached to the Avengers Blu-Ray release. This one takes a slightly different turn than previous shorts as it focuses on hapless couple who end up with an alien weapon after the invasion that took place in The Avengers and then go on a crime spree with it while SHIELD Agents hunt them down. 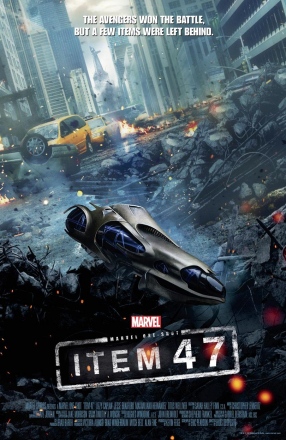 Here is the description of the short.
Lizzy Caplan and Jesse Bradford star as a down-on-their-luck couple who find one of the discarded alien guns from the finale to The Avengers — and proceed to make some incredibly bad decisions.

This is the longest, most elaborate of the Marvel shorts so far, and could be a first step toward using short-subject films to dive deeper into the Marvel universe and introduce beloved but less-familiar superheroes to the mainstream.

Item 47 refers to the gun itself, which S.H.I.E.L.D. would like very much to retrieve from the hapless young troublemakers. “The world is topsy-turvy now. There’s been an alien invasion, and things are crazy,” explains Marvel Studios co-president Louis D’Esposito, who directed the film himself. “So when this gun ­literally fell into their lap, this is a sign: We’re going to rob a few banks, we’re going to buy a boat, we’re going to the Caribbean, and all our problems will be solved.”

Two S.H.I.E.L.D. agents (Maximiliano Hernández, returning from Thor and The Avengers, and Lost’s Man in Black Titus Welliver, making his Marvel debut) are given the job of cleaning up the mess and stopping this modern Bonnie and Clyde (not coincidentally named Benny and Claire.)