I grew up watching cartoons like Peabody and Mr Sherman, Underdog, Fractured Fairy Tales, and Rocky & Bullwinkle, so I get really nervous when I hear about one of them being turned into a CGI film.

With that said, I hit play on this trailer with every intention of hating it. It was pretty surprising to find that I actually laughed a couple of times. Ty Burrell does a pretty good job as the genius dog Mr. Peabody. I tihnk he’s a better choice than Robert Downey jr,w ho we reported was attached to the film back in 2011. I’m not saying the movie is going to be good. I’m just saying this trailer was better than expected.

Mr. Peabody, the most accomplished dog in the world, and his mischievous boy Sherman, use their time machine – The Wabac – to go on the most outrageous adventures known to man or dog. But when Sherman takes The Wabac out for a joyride to impress his friend Penny, they accidently rip a hole in the universe, wreaking havoc on the most important events in world history. Before they forever alter the past, present and future, Mr. Peabody must come to their rescue, ultimately facing the most daunting challenge of any era: figuring out how to be a parent. Together, the time traveling trio will make their mark on history. 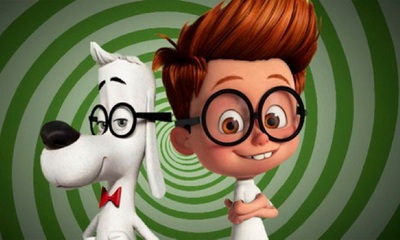