Want to see a candid, lost interview with Steve Jobs on the big screen? On May 11th, you’ll get your chance!

Several months have passed since Steve Jobs lost his battle with cancer. Since then, the biggest thing to happen with his name on it was that it was announced that Ashton Kutcher would play him in a film. The truth is… the only person suited to play Steve Jobs is Steve Jobs and that is exactly what is about to happen.

Seventeen years ago Jobs did an in-depth interview that was considered lost. It was found and Magnolia is set to release the uncut tape in theaters on May 11th. I’m not sure if this is the kind of thing that I’ll want to see in theaters, but I’ll definitely be checking it out when it hits Netflix.

Here’s the official announcement:
New York, NY – May 2, 2012 – The Wagner/Cuban Company’s Magnolia Pictures announced today they have acquired US rights to STEVE JOBS: THE LOST INTERVIEW. This candid, in-depth interview with the late visionary was filmed in 1995 by Robert Cringely, and Jobs discusses at length his early days, career battles, and vision for the future. Small portions of the piece were used for a television series at the time, but the vast majority was shelved, and for 17 years thought to be lost. Recently unearthed, it is being presented in its unedited entirety, providing a fascinating look at Jobs at a particularly interesting, transitory moment in his career, two years before he would go on to retake control of Apple.

“STEVE JOBS: THE LOST INTERVIEW is a fascinating document that will be enlightening and entertaining for anyone that’s interested in Jobs’ legacy,” said Magnolia President Eamonn Bowles. “It’s a valuable piece of history that has thankfully been rescued from obscurity.”

The film had limited special screenings at select theaters in the Landmark circuit earlier this year that were very well received. Magnolia will open the film in select theaters on May 11th, with a DVD and VOD release to follow later this summer.

Said Robert Cringely: “We knew we were witnessing history being made back in 1995 but the Landmark audiences confirmed it: they were stunned by our unconventional documentary, making this broader release a no-brainer. This is Steve Jobs as never seen before.” 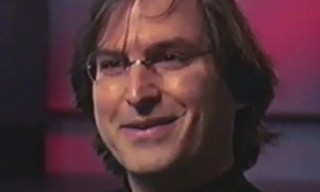