Standing in at a monstrous 6’8″ and 315 pounds, the former UFC heavyweight champion Tim “Maine-iac” Sylvia (24-6) is reported cast as the next Jason Voorhees. 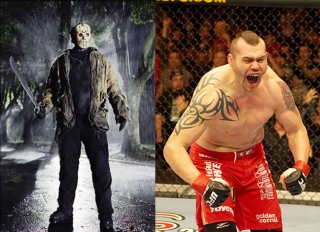 Standing in at a monstrous 6’8″ and 315 pounds, the former UFC heavyweight champion Tim “Maine-iac” Sylvia (24-6) is reported cast as the next Jason Voorhees in the upcoming yet-to-be-titled “Friday the 13th” sequel.

According to Fighters.com, Sylvia is currently in Boston and a source close to the fighter confirms it.

Sylvia who has all but retired from the UFC after being embarrassingly knocked out in nine-seconds by 48-year-old “Merciless” Ray Mercer would probably be the first Voorhees to get knocked out by his victims as he is currently riding a three-fight losing streak with his MMA career in jeopardy.

Sylvia does have a return fight in less than three weeks on September 18 at Adrenaline MMA 4 in Iowa — a must win situation. He is reported to be training in between filming at the Sityodtong USA with trainer Mark DellaGrotte, who trains two-time UFC lightweight title challenger “KenFlo” Kenny Florian (11-4), former UFC middleweight challenger “Predator” Patrick Cote (13-5), and The Ultimate Fighter 1 finalist “American Psycho” Stephan Bonnar (11-6).