*GASP* Dwayne Johnson Stars In A Movie That Isn’t By Disney!

Dwayne Johnson kicks Disney and annoying kids to the curb in his new film “Faster.”

USA Today has your first look at Dwayne Johnson’s new film “Faster,” where he stars in a “hardcore” movie that isn’t by Disney or requiring him to pander to annoying little kids. The Rock has always stated that he soul the last few years of his life to Disney just so his children will have movies starring their father that they can watch. So I can’t really rag on him for wanting to be a good father. Plus, it’s not like he didn’t get paid. So in his book it’s a win-win.

Johnson’s new film, “Faster,” will have him star was an ex-con who’s out on a mission to avenge his brother’s death. Notorious’ George Tillman is set to direct and it will also stars Billy Bob Thornton and Carla Gugino as cops working to stop Johnson.

In his interview with USA Today, Johnson also reveals that he gets shot in the head in the film.

“Isn’t that great? It’s fun to come back after a few years. I always consider acting like an education. You learn something on every movie. I feel like I’m coming to this as a different actor,” says Johnson. 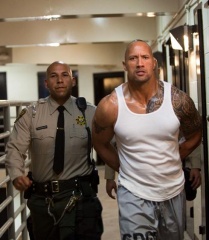