Get Your Hands Off Me Again You Damn Dirty Ape!

After all, just cause the horse is dead, doesn’t mean you have to stop kicking it. 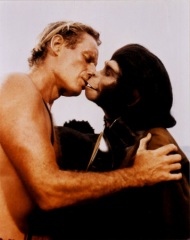 You might think the world doesn’t need another Planet of the Apes Movie. And you are probably right. But, where there’s a money-hungry movie executive, there’s always a desire to recycle an old property so they can squeeze as much blood from the stone as possible. After all, just cause the horse is dead, doesn’t mean you have to stop kicking it.

To those who loved the Apes series, you know that there were five movies that had a circular plot. There was a lot of time travel and various shenanigans, but in the end, the final movie was lined up perfectly as a prequel for the first movie. Well, it looks like that’s the direction Fox is now going in. They are contemplating a remake of Conquest of the Planet of the Apes.

Conquest is the story of Caesar, the ape who said no, the first ape with speech who started the events that led to a world where monkeys were on top and humans were dumb beasts.

They’ll be calling it: Genesis: Apes, and there’ll be several differences from the original like the setting of present day instead of the 70’s.

According to movie site, CHUD: “In this version Caesar is the result of a genetic scientist fooling around with the nature of things. When the baby monkey exhibits intelligence and the ability to talk, he takes the cuddly thing home to his wife, who is unable to bear children. Things go surprisingly well for a number of years until Caesar grows up and sees mommy getting attacked. The dutiful son steps in and accidentally kills the attacker.”

“You’re on Caesar’s side, understanding where this poor outcast is coming from. But then the script gets really ballsy and, just like in Conquest, Caesar begins a campaign to unite the apes and overthrow human society. And his plan isn’t a Martin Luther King Jr series of marches, speeches and sit ins – Caesar and his apes take to the streets violently.”

Hopefully this film never gets made, but with the lack of creativity that Hollywood has to offer, I wouldn’t be surprised.