No real news on Guardians of the Galaxy today, but holy crap this is a cool poster.

No real news on Guardians of the Galaxy today, but holy crap this is a cool poster. 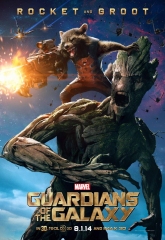