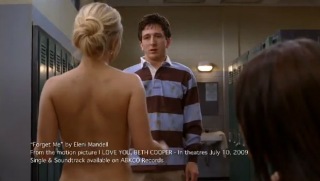 Everyone’s favorite Heroes’ Hayden Panettiere admits that she was “fine” appearing naked on the set of her upcoming film ‘I Love You Beth Cooper.’

In Cooper, Panettiere plays Beth Cooper, a cheerleader and the most popular girls in high school.

“It didn’t bother me much,” Panettiere says of shooting the scene in which she drops her towel in the school locker room.

While she bears all on set and was in fact naked for the scene, fans unfortunately will only see her bare back as Cooper is a PG-13 comedy…

So does this mean we can expect some Panettiere full frontal anytime soon? “I’m cool with my body, and I’m cool running around undressed and all that stuff, but there are just certain things that not everyone needs to know, that you need to keep somehow private and personal to you.”

“But you never know, you never know. I could be 30 years old and just be like, ‘Screw it — I want to take it all off. I better take a picture of this baby before it all goes.'”