HBO’s ‘Game of Thrones’ Renewed For A Second Season

Despite airing just one episode this past weekend, HBO has officially renewed their new period piece drama “Game of Thrones” for a second season. 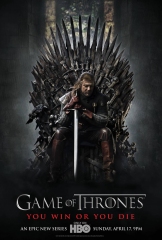 Despite airing just one episode this past weekend, HBO has officially renewed their new period piece drama “Game of Thrones” for a second season. According to the official press release, the gross audience response for the premiere was 4.2 million viewers, which officially gave HBO 4.2 million reasons to renew it.

Here’s the complete press release:
Following strong critical and viewer response to the series’ April 17 debut, HBO has renewed GAME OF THRONES for a second season, it was announced today by Michael Lombardo, president, HBO Programming.

“We are delighted by the way David Benioff and D.B. Weiss have brought George R.R. Martin’s amazing book series to the screen, and thrilled by the support of the media and our viewers,” said Lombardo. “This is the continuation of an exciting creative partnership.”

Based on the bestselling fantasy book series “A Song of Ice and Fire,” by George R.R. Martin, GAME OF THRONES follows kings and queens, knights and renegades, liars and noblemen as they vie for power in a land where summers span decades and winters can last a lifetime.

Among the early critical raves, TV Guide has called the show “a crowning triumph” and “brilliant,” while the Los Angeles Times termed GAME OF THRONES “a great and thundering series,” as well as “wild and bewitching.” The Hollywood Reporter praised the “excellent storytelling, superb acting and stunning visual effects,” and the New York Post observed that the “art directing, acting and incredible sets are as breathtaking as the massive scope of the series.”

The gross audience for the premiere night of GAME OF THRONES on the main HBO channel was 4.2 million viewers.