Similar to 2D fighters like Primal Rage or Street Fighter, you take control of a magnificent beast and bite, claw and rip your way to victory. Heck, you can even do combos, who knew dinosaurs could count.

Click here to play and be sure to watch Jurassic Fight Club on The History Channel. 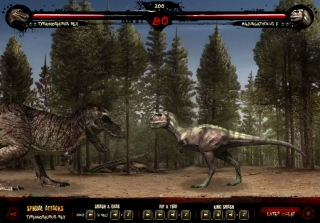