Donald T. Trump inadvertently wiped out the human race, animals have evolved to take our place. Sadly, history seems to be repeating itself…

There’s a new Kickstarter campaign that anyone who loves great voice actors is going to want to look at. the new project, called “A Foul American” is an animated parody of the current political structure in the US, translated into a world where we’ve already blown ourselves up and now animals have managed to let history repeat itself.

The series is created by Greg Cipes (The voice of Beast Boy on Teen Titans) and Writer, Illustrator: Kevin Coulston. The cast is filled with some serious talent including: Tara Strong (Harley Quinn, My Little Pony), Sean Astin, Robert Paulson (Yakko on The Animaniacs, Pinky on Pinky and The Brain), Rliey Keough ( George Miller’s Mad Max: Fury Road) and several others. Check out the videos and description below and then toss them a couple bucks on Kickstarter if you feel so inclined.

Years after the 45th President of the United States of America, Donald T. Trump inadvertently wiped out the human race, animals have evolved to take our place. Sadly, history seems to be repeating itself…

As all humans died from issues directly or indirectly related to the nuclear fallout, the remaining animals of earth amazingly mutated and adapted into humanoids who instinctively adopted a rudimentary form of human culture. Some governments and even militaries remain mostly intact and are run in many cases by duly or otherwise elected so called, “official” animals in their respective countries. America, for example, is run by Eagles…except for of course President Rump who is a chicken. He vigorously maintains that he is not just any Eagle, but one of the Nation’s founding Eagles, a fact no one seems to be willing to question.

President Rump’s approval ratings drop with every breathe he takes. He’s VILE, He’s VULGAR, He’s A VILLAIN. He’s also more than a little confused and quite possibly not at all interested in his job.

The traits that make him preposterous are the same traits that keep him in the news. He is a headline grabbing media super star, almost always for the wrong reasons and the American public can’t get enough. People ask if he’ll be an 8-year president or if he will be impeached. The truth is that folks might just be lucky to make it out alive. As it stands now, the fate of us all rests in the disturbingly uncertain hands of A Foul American Indeed. 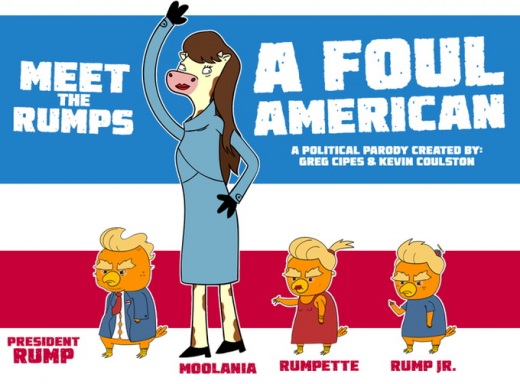 President Rump: The leader of the free world. President Rump is a Chicken who claims to be an Eagle. After the humans died out, he found Donald Trump’s wig put it on and picked up right where he left off.

As the evolved humanoid animals started to rebuild the society and governments the humans left behind. Rump posed as an Eagle, the American Symbol to win the presidential election and essentially take on the life of his predecessor Donald Trump.

Rump is an egocentric megalomaniac and often acts in his own interest above all else.

Moolania: Slovenian born Supermodel, and current first lady Moolania married President Rump for his money… No reason to beat around the bush here, who in their right mind could love that? Moolania may play the part of a ditsy air-headed super model, but she’s probably the smartest person living or working in the White House at the moment.

The Rump Kids: The teenage son and daughter of President Rump. Rump Jr. and Rumpette are exact genetic copies of their father because in his words “No one has better genes than me, no one, that is a fact.”

These kids are every bit as egocentric and petty as their father, but in a more juvenile way, if you can even imagine. 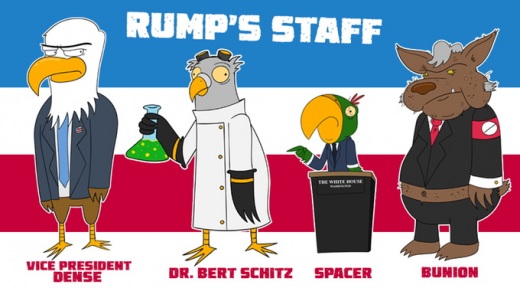 Vice President Dense: Selected as President Rump’s running mate by the Republican Party to provide the President with a more traditional conservative foundation. However, VP Dense is a little more conservative than expected and often uses his powerful position to impose his religion fueled beliefs on others. As hard as it may be to believe, Dense tends to be the voice of reason when President Rump gets out of hand.

The VP is an Eagle, and although he’s aware that President Rump is a chicken, he’d never call him out on it.

Dr. Bert Schitz: A German Pigeon who’s employed by President Rump as the official mad scientist of the United States. He works out of the White House basement, often on nefarious experiments. 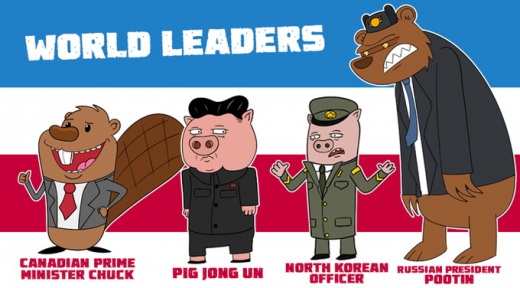 Canadian Prime Minister Chuck: A beaver who runs the peaceful country of Canada. He’s very confused as to why President Rump has a vendetta against him and his country.

Pig Jong Un: The Glorious Leader of North Korea is President Rump’s greatest enemy and rival. In a lot of ways Pig Jong Un isn’t too different from President Rump, and Rump himself is actually quite jealous of the North Korean leader’s unrestricted power.

He’s impulsive, often acting without thinking, because no one dare question the actions of their Dear Leader.

North Korean Officer: This North Korean Officer or rather many Officers is Pig Jong Un’s right hand man. He’s routinely commits suicide or is killed when his Dear Leader is displeased with his actions. After death he is always quickly replaced with an exact look-alike.

Russian President Pootin: Pootin the Bear is the President of the Russian Federation. Not much is known about him, other than he is to be feared. 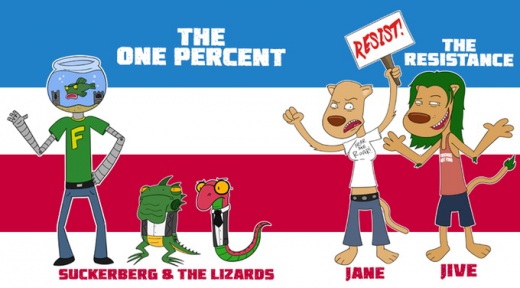 Suckerberg & The Lizards: Suckerberg is the C.E.O. of President Rump’s Social Network of choice, Flitter.

Suckerberg along with his billionaire lizard friends use thier immense wealth and power to influence president Rump and other world leaders so that events unfold in a way that is beneficial for them.

Many conspiracy theorists claim the government is controlled by lizard people, and they’re absolutely right.

Jane: Rebellious feminist turned political champion. She is the leader of the resistance against President Rump and his tyrannical rule.

Jive: High level member of the resistance, often at the front lines of any current protest. Vegan. Smells of weed. Jive is the brother of Jane.