Interview: John Cameron Talks About Safe Cigs, The Marines And Working With His Brother James

From a Marine Sergeant to a military consultant on films like’ Avatar’, John now plans to save the world with electronic cigarettes.

When we got the call that we’re doing a one on one interview with John Cameron, I grabbed as much information about him as I could. He was a Marine who served in Desert Storm. He worked on ‘Ghosts of the Abyss’ and ‘Aliens of the Deep’, and now he is partnered with… an electronic cigarette company? Admittedly, that last bit had me a bit skeptical. I assumed that this rather rich and powerful guy was coming to comic con to pitch his cheap product (though isn’t that a lot of what comic con is these days?) and use the guise of his involvement of ‘Avatar’ to get him interviews.

When we met, what surprised me was that he wasn’t some salesman trying to make a quick buck with a trendy gimmick, John was trying to get the word out about electronic cigarettes and how they saved his life. A ten year smoker, John had quite a monkey on his back and this was the only thing that got him to quit. In the interview he seemed very genuine and was just there promoting better health for all than trying to sell me a piece of plastic.

Of course, that isn’t all we talked about. John also took some time to talk to us about his time in the military and some of the amazing film projects that he’s worked on with his brother James Cameron. 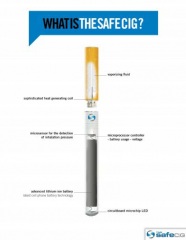 I wasn’t sure what to expect going into this interview, but it turned out pretty and well and John had a lot to say. He’s a passionate guy that truly believes in what Safe Cigs can do to change the world. If I was still a smoker I’d have given Safe Cigs or any other electronic cigarette a try after talking with John. He’s one of those guys that can just get you excited for whatever it is they’re talking about. Lucky for me that he wasn’t talking about jumping in a large pile of human poop being good for dong size cause I’m pretty sure I’d have done it right after the interview.

If you smoke but you don’t want to, try an electronic cigarette today. It may change your life or you’ll feel like a doofus and never try it again. Either way check out the Safe Cigs website.

Maybe it’ll be the one thing ya need to kick the habit, save some money, and possible start a new habit with your new found cigarette fortune. Some ideas: start a gambling habit, invest in chocolate, buy a hovercraft, pay off your student loans, buy a petting zoo, and last but not least my final suggestion is put it all in the swear jar and curse your head off at the lame neighbors with that mean ugly dog! (I’m talking about the one that smells like rotten baloney, not the neighbor that wears those funny hats, that guy cracks me up.)