This is not to be confused with the similar news that spread across the net earlier today about Star Trek Into Darkness… which turned out to be a hoax.

In six days, Marvel will release the first teaser trailer for Iron Man 3, directed by Shane Black. However, they are now offering fans a chance to get an even earlier sneak peek and all it costs you is the click of a like button.

The official page for the film has just recently launched an image of a powered down arc reactor. When enough fans licke the page, it will generate enough “Fan Power” to re-energize the arc reactor and initiate a sneak preview of the teaser trailer. 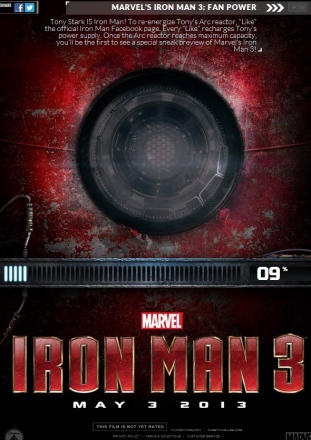