Seth Grahame-Smith has quit The Flash over creative differences and now there’s rumors that James Wan is considering bailing on Aquaman.

While fans are gearing up for the MCU’s Captain America: Civil War, things are getting a little bumpy over on the Warner Bros side of the comic book film universe. A large group of fans are calling for the removal of Zack Snyder from Justice League, Seth Grahame-Smith has quit The Flash over creative differences and now there’s rumors that James Wan is considering bailing on Aquaman.

If you ask Wan though, he’s still happy under the sea, based on his recent tweets. He’s not coming out and telling the world he’s staying, but he’s posted an image of himself, leaning against a backdrop of Arthur Curry (Aquaman) and the character quote: “You guys are killing me.”

Here’s the original report from BDM which claimed the exclusive on him allegedly leaving the film:

According to multiple, reliable sources James Wan is feeling a tremendous amount of trepidation about Aquaman. It’s important to remember two things – Fast 7 was a very difficult process for him, even without Paul Walker‘s tragic death, and James Wan doesn’t really need Aquaman. With The Conjuring 2 and Lights Out (which he produced), Wan will be owning WB’s summer slate, bringing in a lot of money with movies that cost a fraction of Aquaman. Aquaman needs Wan, and right now Wan is trying to decide if he needs that hassle. 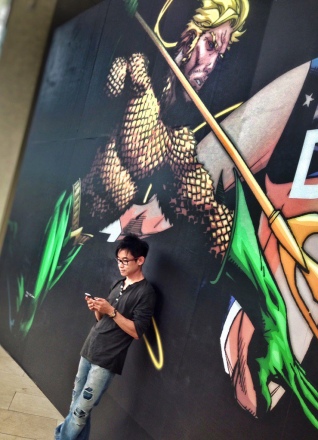