Is Runaways the Next Goonies?

He writes the kind of books that people who hate comic books can completely lose themselves to. 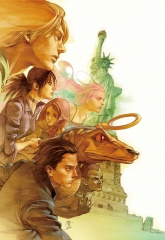 Short answer… No. In fact, there is no “next Goonies” as we mentioned here a few days ago. That said, Runaways, along with Y the Last Man, Ex Machina, and Pride of Baghdad are probably some of the best comic books to hit shelves in the last 5 years. All these books have one thing in common: Brian K. Vaughan. Non comic book readers might recognize his work as a writer for the upcoming season of Lost, but for those who have read his work, he is revered. He writes the kind of books that people who hate comic books can completely lose themselves to.

Well, the word just popped up on MTV.com a couple hours ago that Vaughn is currently working on a script for a Runaways movie. The project isn’t slated until after the Avengerspolooza that Marvel Comics is planning for 2011, but when the dust settles we might all be in for a big treat. The greatest news is that it sounds like the script will be based off the creation story arc that started the series.

What is Runaways? Let’s see what Wikipedia has to say…
– Runaways is a multiple award-winning series of comic books from Marvel Comics. Created by Brian K. Vaughan and Adrian Alphona, the series features a group of teenagers who discover their parents are a part of an evil crime group called the Pride. After discovering their own true heritage, the kids defeated their parents, and attempt to make up for their sins by protecting Los Angeles from the villains attempting to fill the Pride’s void. The group features powerful witch Nico Minoru, solar-powered alien Karolina Dean, cyborg Victor Mancha, mutant Molly Hayes, getaway guy Chase Stein, psychic dinosaur Old Lace, plant-manipulator Klara Prast, and shape-shifting Skrull, Xavin.

In 2006 alone, the series won the Harvey Award for best continuing/limited series and an Eisner Award. It was also additionally nominated for a Shuster Award, and Georgia Peach Award. Series creators Brian K. Vaughan and Adrian Alphona left the series at issue twenty-four of the title’s second volume. The second volume was continued by Joss Whedon and Michael Ryan until they departed at issue thirty. Terry Moore, creator of Strangers in Paradise currently runs the series with Humberto Ramos on art.