Is Simon Pegg Ant-Man or Just A Really Good Troll?

Simon Pegg is either leading up to a big Marvel film announcement like Vin Diesel, or he is playing a very mean prank on his fans.

We all sat through weeks of Vin Diesel teasing a potential role in an upcoming Marvel film, including him posting a shot of himself Marvel HQ next to a poster of the Avengers. The end result is not what we expected, he’ll be playing Groot in the Guardians of the Galaxy instead of Vision or Thanos like everyone was guessing.

Today, Simon Pegg is capitalizing on his own visit to the House of Ideas with this image that he posted of himself next to an Avengers poster, pointing slyly towards Ant-Man. Now, the internet is abuzz with rumors that he will be taking on the role. While it could make sense because of his relationship with the film’s director, Edgar Wright, with whom he’s worked on at least three films now, it is way too early to speculate. 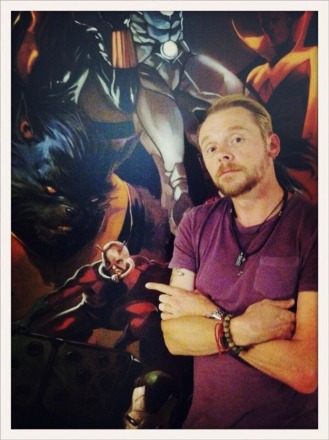