I hate to be the bearer of bad news, but the much talked about full frontal topless scene of Jennifer Aniston has been cut from the final theatrical version of “Wanderlust.” 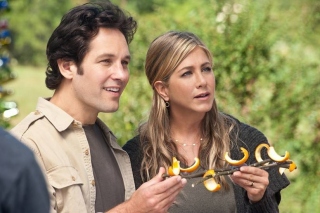 I hate to be the bearer of bad news, but the much talked about full frontal topless scene of Jennifer Aniston has been cut from the final theatrical version of “Wanderlust.”

According to critics who have seen the theatrical cut of the film, the full frontal topless scene, which was not only talked about but filmed, has been cut from the film.

Originally, the scene was to show Aniston going topless in front of TV news cameras for shock value. She bare her breasts standing in front of news cameras but in the version that will be included in the final cut, Aniston will only be shown topless from behind, with her breasts pixelated and shown from the view of a TV news broadcast.

Rumor surrounding the cut has it that Aniston asked producers not to show her topless in the final cut out of respect to her now live-in boyfriend Justin Theroux, whom she met on the set of the film. A rumor, Aniston’s publicist is denying saying she had nothing to do with it and that it was “hit it was always supposed to be.”

If I had to wager, it was cut in order to sell an Uncensored Blu-ray edition later down the line.

Director David Wain (Role Models) and produced by Judd Apatow (Knocked Up), “Wanderlust” is a comedy about a couple who leaves the pressures of the big city and joins a freewheeling community where the only rule is to be yourself.