“Captain Jack and the Selkie” will be one of two original “Torchwood” stories. 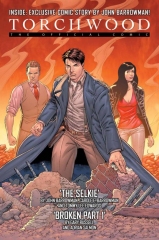 Titan Publishing announced that they will begin producing new “Torchwood” comic based on the hit BBC America show.

“Captain Jack and the Selkie” will be one of two original “Torchwood” stories in issue #1 and sees Jack facing a deadly threat on a remote Scottish island, where people are disappearing one by one. To his horror, Jack starts to suspect he may know who, or rather what, is responsible.

“Tommy and Trevor had drawn a brilliant poster of my face super-imposed over the Face of Boe, which I think is the best piece of Captain Jack art I’ve seen,” said Barrowman. “The four of us hit it off immediately and I asked if they’d ever be interested in working with us on a Captain Jack project. They thought about it for, oh, about 30 seconds, and so ‘Captain Jack and the Selkie’ was born!”

The second story is part one of a special five-part story written by Torchwood TV script editor Gary Russell. Entitled “Broken,” the story sees Captain Jack, Gwen and Ianto get trapped in a cosmic hotel, while an old villain from the TV series returns.

Artwork for “Broken” is provided by Adrian Salmon, whose work includes “The Cybermen” for Doctor Who Magazine and “Judge Karyn” for the Judge Dredd Megazine.

Two collectible covers will be available for each issue – an art cover and a picture cover. British comic book artist Ian Churchill, whose work includes Superman for DC Comics and Avengers, Deadpool, and X-Men for Marvel, has drawn the art cover for issue #1. An alternate art cover, also drawn by Churchill, will be available exclusively at this year\’s San Diego Comic Con.