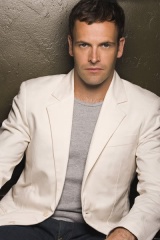 Casting for AMC and Frank Darabont’s adaptation of “The Walking Dead” TV series is well underway. Last week we reported that Jon Bernthal (Eastwick) was announced to play Grimes’ friend Shane. Today we got word that Jonny Lee Miller (Hackers, Eli Stone) is currently in talks to play the lead, Rick Grimes.

Grimes is a small-town police officer who bands together and leads a number of survivors in a world infested with zombies.

Shooting for “The Walking Dead” pilot doesn’t begin until May. While the series hasn’t been picked up officially, there’s hopes that it’ll find success and become more of an ongoing series than the current talks of it being only a six episode series.

For those that have been watching AMC’s outrageously excellent “Mad Men,” then you know “The Walking Dead” has the same potential to be that good. Fingers crossed.