‘Justice League’ Review Round Up – Including Leaked RottenTomatoes Score

We haven’t had a chance to see Justice League yet, and Rotten Tomatoes is holding back their score on the film until tomorrow. However, that doesn’t mean that there aren’t already reviews coming out on the film. So, what do the critics think? Let’s take a look at some quotes from popular reviewers to see if they think this movie redeems the DCEU or if it just drags it further down the hole.

Associated Press- 1.5 Stars
“Justice League” feels like a bunch of disconnected moments with no governing theory behind it other than the fact that this movie has to come at this time to introduce audiences to characters whose stand-alone movies have already been promised to shareholders.

Collider – D+
So Justice League leaves you hoping for next time. Did you like the brief trip to Atlantis? Wait until you see Aquaman. Did you like Wonder Woman taking on a leadership role? Wonder Woman 2 arrives November 2019. Did you laugh at all of Flash’s lines? Well there might be a Flashpoint movie down the road. Next time we’ll get it right.

New York Times – “Better Than The Last One!”
“Justice League” settles into a groove once it finds its gang. As Bat-Bruce moodily pushes and prods and Wonder-Diana smiles and smirks, the newbies jockey for position. The Flash gets most of the best jokes, and Mr. Miller makes most of them work, largely in the role of in-house fanboy with a touch of the Cowardly Lion. It’s golly-gee stuff, but it’s also human and Mr. Miller keeps you hooked, as does Mr. Momoa (“Game of Thrones”), who supplely shifts between gravitas and comedy. When Aquaman chugs a bottle of booze before plunging into an angry sea, the movie hits the comic-book sweet spot between deadly seriousness and self-amused levity.

Variety –
It’s not just a sequel—it’s an act of franchise penance. The movie, which gathers up half a dozen comic-book immortals and lets them butt heads on their way to kicking ass, is never messy or bombastic. It’s light and clean and simple (at times almost too simple), with razory repartee and combat duels that make a point of not going on for too long.

Guardian:
Really, Affleck spreads a pall of dullness over the film. He doesn’t have the implacable, steely ferocity and conviction that Christian Bale had; he seems to have a faint sheen of sweat, as if the Batcave thermostat is up too high, and his attempts at droll humour and older-generation wisdom make his Batman look stately and marginal. Maybe we should get George Clooney back for the role.

Chicago Tribune:
… the blur of horrible CGI that starts from minute one and never lets up—including Cavill’s bewildering upper lip. The action is insane and impossible to follow, geographically. After a while you just give up trying to understand anything as the Justice League batters away at the alien warriors.

* Update: Movieweb claims to have a leaked screen shot of the score and it’s not pretty. According to this alleged leak, the current score is 48%. In it’s defense, BvS only got 27%. 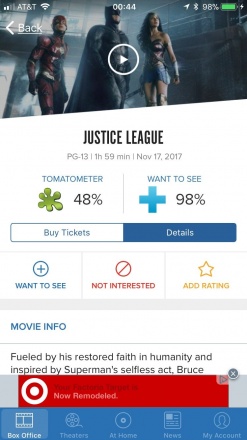