The tale revolves around Nita, who inhabits Baloneytown, and finds herself caught in a vicious cycle of corporate clown gigs that creep ever closer to prostitution. 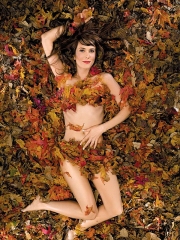 Everyone knows that I have the biggest fan crush on Kristen Wiig (Extract, Macgruber), so it excites me to no ends to report that she has, with her own money, optioned Monica Drake’s “Clown Girl” novel.

Published in 2007, “Clown Girl” is about a girl named Nita who performs as Sniffles the Clown and does her best to avoid the seedy world of clown fetishist prostitution. Wigg will adapt the screenplay and also star as Nita, which seems like a character written just for her.

Here’s the synopsis from the Novel from Amazon:
The tale revolves around Nita (aka Sniffles the Clown), who inhabits Baloneytown, a depressed, crime-infested metropolis where residents peer warily out their windows when a cop car drives by. Nita aspires to high art but finds herself caught in a vicious cycle of corporate clown gigs that creep ever closer to prostitution. She misses her boyfriend (and fellow clown) Rex Galore, who has gone off to interview at Clown College. And now her dog has gone missing, her relationship with her housemates is on the skids, and the only friend she has left is a golden-haired policeman who is surprisingly concerned about her well-being.

Although I’ve never heard a single thing about Drake’s novel, the Amazon synopsis seems interesting if not extremely promising. And hey, fellow novelist Chuck Palahniuk introduced the novel, so it can’t be all that bad right?