Ledger Allegedly Wanted To Be Fired From “The Dark Knight?”

“Ledger had a pay-or-play deal on The Dark Knight—meaning he’d get compensated no matter what—so he felt he had the freedom to do whatever he wanted as the Joker.” 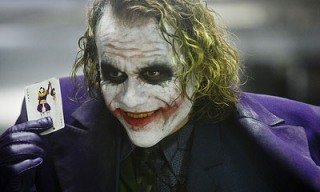 The newest Vanity Fair features an article about the late actor Heath Ledger. In its online experts, one source close to the actor insinuates that ledger’s award-winning performance as the Joker in “The Dark Knight” was in a way an attempt by Ledger to get fried from the film and collect his pay-or-play check without having to complete the project.

The excerpt from Vanity Fair:

Ledger’s friend and agent, Steven Alexander, tells Biskind that Heath “was always hesitant to be in a summer blockbuster, with the dolls and action figures and everything else that comes with one of those movies. He was afraid it would define him and limit his choices.” According to friends of Ledger’s, one of the reasons he agreed to do Dark Knight was that the unusually long shoot would give him an excuse to turn down other offers.

Alexander tells Biskind that Ledger had a pay-or-play deal on The Dark Knight—meaning he’d get compensated no matter what—so he felt he had the freedom to do whatever he wanted as the Joker. According to Pecorini, Ledger hoped his performance would be so far-out he’d be fired, and thus become the beneficiary of a lengthy, paid vacation.

“He was ready to bust out of the gate, but he didn’t want to step on the gas and become something that he didn’t want to become: a matinee idol,” says Alexander. “He was a private person, and he didn’t want to share his personal history with the press. It just wasn’t up for sale. That’s part of the reason he initially tore down his career. He wasn’t motivated by money or stardom, but by the respect of his peers, and for people to walk out of a movie theater after they’d seen something that he’d worked on and say, ‘Wow, he really disappeared into that character.’ He was striving to become an ‘illusionist,’ as he called it, able to create characters that weren’t there.”