Director Jon Favreau’s all-new “The Lion King” journeys to the African savanna where a future king is born. Simba idolizes his father, King Mufasa, and takes to heart his own royal destiny.

I know a lot of people are still referring to Jon Favreau’s remake of the Lion King as a live-action remake as it is part of Disney’s initiative to create live-action versions of every single one of their classic films, but I won’t call it that. This new TV spot is a great example of why. I don’t know if a single frame of that trailer contained anything that was actually live-action and was not CG. With that said, it looks great, as I’m sure it will for the next 18 months until technology takes another leap forward and these CG graphics look as dated as the CG animation we can now look back at from 2017.

I’m being hard on this movie because it always feels cheap when a studio does what looks like a shot-for-shot remake of a classic property for the sole purpose of cashing in. What they’ve yet to show us is how these lifelike creations are going to look when they are singing Hakuna Matata or I Just Can’t Wait to Be King. We’ve also yet to see anything from this film that makes it special and different from the original, other than the new cast and animation style. 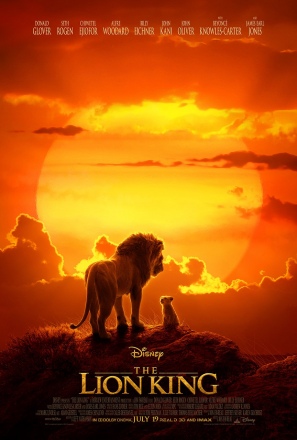 “From Disney Live Action, director Jon Favreau’s all-new “The Lion King” journeys to the African savanna where a future king is born. Simba idolizes his father, King Mufasa, and takes to heart his own royal destiny. But not everyone in the kingdom celebrates the new cub’s arrival. Scar, Mufasa’s brother—and former heir to the throne—has plans of his own. The battle for Pride Rock is ravaged with betrayal, tragedy and drama, ultimately resulting in Simba’s exile. With help from a curious pair of newfound friends, Simba will have to figure out how to grow up and take back what is rightfully his. The all-star cast includes Donald Glover as Simba, Beyoncé Knowles-Carter as Nala, Chiwetel Ejiofor as Scar, James Earl Jones as Mufasa, Billy Eichner as Timon and Seth Rogen as Pumbaa. Utilizing pioneering filmmaking techniques to bring treasured characters to life in a whole new way, “The Lion King” roars into theaters on July 19, 2019.”