Cartoon Network is teaming up with Angry Filmworks and “Transformers” producers to develop a live-action “Captain Planet” movie. 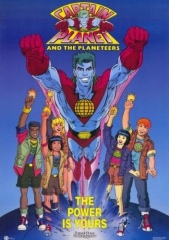 Cartoon Network is teaming up with Angry Filmworks and “Transformers” producers Don Murphy and Susan Montford to develop and adapt a live-action “Captain Planet” movie based on the eco-friendly 90s’ animated series “Captain Planet and the Planeteers.”

“The messages of Captain Planet are even more relevant today,” said Snyder. “We feel this team can bring the world’s first eco-hero to life in a powerful motion picture that is not only pertinent but entertaining.”

“We are extremely excited about bringing the good Captain back to life,” said Murphy. “His adventures are known worldwide and he is recognized across generations. We expect to make a spectacular series of films with the amazing team at Cartoon Network.”

“With the earthquakes, tornadoes, melting icebergs and all the other problems threatening the world right now, Earth really needs her greatest defender,” said Montford.

In an effort to inform younger viewers about serious environmental issues, legendary cable entrepreneur Ted Turner partnered with DIC Enterprises created the world’s first animated environmental series, “Captain Planet and the Planeteers.” The series premiered in fall 1990 for six full seasons and was about a group of young people who combine their special powers (The Planeteers) to summon Captain Planet, an environmental superhero, to battle the world’s worst eco-villains.

“Captain Planet and the Planeteers” was a success, winning multiple Environmental Media Awards across its production, as well as several Daytime Emmy nominations.