“TMNT” is currently in production at the Nick Animation Studio in Burbank, Calif., and the show is set to premiere in fall 2012. 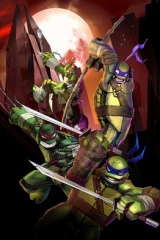 “TMNT” is currently in production at the Nick Animation Studio in Burbank, Calif., and the show is set to premiere in fall 2012. Executive produced by Ciro Nieli, Joshua Sternin and J.R. Ventimilia, the half-hour action-comedy series will breathe new life tell new adventures for the heroes in the half shells. For the first time ever the turtles will emerge from their hidden underground sewer lair and confront “the wondrous and hostile world of New York City and face enemies more dangerous and pizza more delicious than anything they could have imagined.”

The show will “explore the camaraderie of four teenage brothers learning to rely on themselves and one another as they unravel the mystery of their existence and grow to become the heroes in a half-shell that they are destined to be.”

“I’m excited to be joining the ranks of the newest Teenage Mutant Ninja Turtles team,” said Astin. “This franchise and these characters are beloved around the world, and I’m proud to be the next Raphael. I plan to bring the kind of passion and dedication to the role that TMNT fans have the right to expect.”

“We’re thrilled to have such a talented group of actors to voice the Teenage Mutant Ninja Turtles in this new series,” said Brown Johnson, President, Animation, Nickelodeon Kids and Family Group. “This cast will bring great humor and intensity to our new action comedy take on the band of turtle brothers.”

Nickelodeon Consumer Products will continue to work with its original and long-standing toy partner, Playmates Toys, which has been the creative force behind the successful TMNT master toy program over the last two decades. Playmates is already developing an impressive product line based on the new Teenage Mutant Ninja Turtles series which will cater to kids and consumers all around the world.

Be sure to get your first look of the new TMNT this July at San Diego Comic-Con where fans will get an exclusive sneak peek at the re-imagination of Teenage Mutant Ninja Turtles!