Black and white scans from the alleged upcoming Marvel vs Capcom comic book has revealed two new characters that’ll end up being in CAPCOM’s upcoming Marvel vs Capcom 3 video game. From the scans you can see the world devourer Galactus and Taskmaster, both have been rumored to be in the game but it’s just now that we have some sort of “official’ confirmation. Another interesting tidbit is the reveal of the Green Goblin. He is visible in the panel with Hulk and has been colored in to be more visible to the naked eye.

These scans are from Kevin Sharpe, the artist responsible for the comic. They’ve since been removed from the source website. 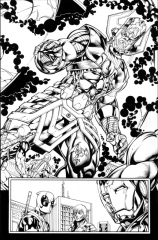