Great new pics of Anne Hathaway’s Catwoman stunt woman on the Bat Pod. Check them out after the jump!

Some great new images just surfaced of Anne Hathaway’s Catwoman Stunt Double from the filming of the new Batman move, ‘The Dark Knight Rises’. There isn’t really anything earth shattering here, just some new angles of the Catwoman costume and the Batpod that Catwoman seems to be attached to for the better part of the filming. 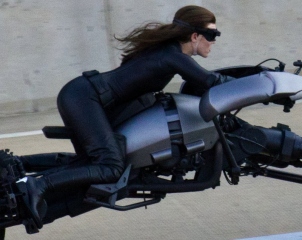