Move Over Professor X. Wolverine Is The New Headmaster

For the last several decades, the one name that has always been attached as the teacher of the X-Men was Professor Charles Xavier. Well, a lot has gone down in the world of mutants. The population is down to under 200. The School for Gifted Children got destroyed. The X-Men built an island off the coast of San Francisco called Utopia… and now Schism. Wolverine and Cyclops were never BFF’s, but now they’ve officially split up… and the “kids” have been split between them. With the split comes two new comic books: Uncanny X-Men and “Wolverine and the X-Men”.

A big part of the new book will be a return to the classic concept of teaching young mutants how to handle their abilities at the new “Jean Grey School for Higher Learning. This is definitely the last place that anyone expected Logan’s character to end up… and he probably won’t be doing it for a very long time, but it does make sense given the events of Schism.

Joining him to teach at the academy will be Kitty Pryde, original X-Men: Iceman and beast, and several other new and old faces. 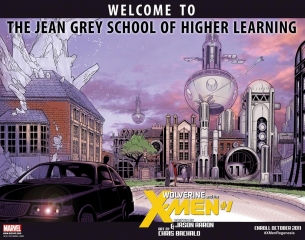