Neil Gaiman has already conquered comics, books, TV and movies, now he’s set his sites on the world of video games. Check out the press release and video below:

Critically-acclaimed, best-selling author Neil Gaiman (“The Ocean at the End of the Lane,” “The Sandman” series of graphic novels, “American Gods,” “The Graveyard Book” and “Coraline”) today announced the launch of his first-ever video game, WAYWARD MANOR. Set in a 1920s Victorian Gothic pastoral estate, WAYWARD MANOR players unravel the mystery of a ghost (player) seeking a peaceful after-life. After a remarkable cast of characters moves into Wayward Manor and wakes him from his post-mortem slumbers, the ghost must find ever-more inventive and brilliant ways to scare them away. As the ghost learns more about the living characters, he also learns more about his own death and after-life, and the danger they are all facing. WAYWARD MANOR will be available just in time for the holidays on PC, Mac, and tablets.

“For quite a while there’s been a story that I’ve wanted to tell, something inspired by the kinds of films that I loved when I was a kid,” said Gaiman. “But I kept running into the same problem: it didn’t really feel like a novel. It felt like something that you would have to experience yourself. So today, I’m proud to announce my first-ever game, WAYWARD MANOR.”

WAYWARD MANOR is being developed by The Odd Gentleman (THE MISADVENTURES OF P.B. WINTERBOTTOM and FLEA SYMPHONY), an award-winning independent video game studio, in conjunction with Moonshark, a game publisher co-founded by Creative Artists Agency (CAA). The release is supported by a unique, exclusive presale campaign, offering rewards for fans including limited-edition merchandise, the opportunity to name a game character, and even a private dinner with Gaiman, among others. Presale orders are now being accepted at www.WhoHauntsNeil.com. 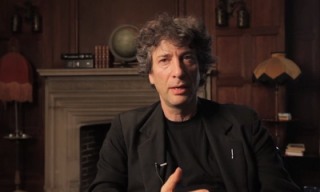