“Young Justice,” a new DC Comics animated series is coming to Cartoon Network this fall which will feature a new modernized team.

“Young Justice,” a new DC Comics animated series is coming to Cartoon Network this fall which will feature a new modernized team.

From CN’s press release:
Young Justice: In Young Justice, being a teenager means proving yourself over and over-to peers, parents, teachers, mentors and, ultimately, to yourself. But what if you’re not just a normal teenager? What if you’re a teenage super hero? Are you ready to join the ranks of the great heroes and prove you’re worthy of the Justice League? That’s exactly what the members of Young Justice-Robin, Aqualad, Kid Flash, Superboy, Miss Martian and Artemis-will found out, whether they have what it takes to be a proven hero. This all-new series is produced by Warner Bros. Animation and based upon characters from DC Comics. Sam Register (Teen Titans, Ben 10, Batman: The Brave and the Bold) is the executive producer. Brandon Vietti (Batman: Under the Red Hood, Superman Doomsday, The Batman) and Greg Weisman (Gargoyles, The Spectacular Spider-Man, W.I.T.C.H.) are the producers.

From the looks of things, “Young Justice” seems like a blend between the CN’s former “Justice League” and “Teen Titans” and has a more mature animation style than that of “Legion of Super Heroes.”

No release date has been given, but we believe it’ll drop sometime in the fall or early spring next year. More on this later. In the meantime, check out the teaser poster released by DC. 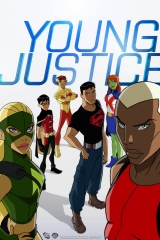