Doctor Who, Amy Pond and an Olympic Torch Bearer vs A Weeping Angel!

For the last couple of years, The BBC has run a school competition where classes of students can team-up to write a mini-episode of Doctor Who. The best script is then actually produced by the BBC. This year’s winner was just announced and the mini-episode was released.

Not surprisingly, the story involves the 2012 Summer Olympics which are set to take place in London. The skit features Matt Smith as The Doctor and Karen Gillan as Amy Pond and pits the intrepid duo (along with an Olympic Torch Bearer) against one of the most horrifying bad guys in the universe, A Weeping Angel. 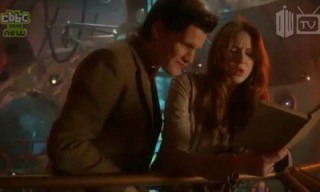