New ‘Hobbit: There and Back Again’ Image of Fili and Kili Released

Check out the first image of Dean O’Gorman and Aidan Turner Fili and Kili in Peter Jackson’s ‘The Hobbit: There and Back Again’

We’ve had a couple of images coming out in the last few days of some of the Dwarfs from ‘The Hobbit: An Unexpected Journey’. Today they have just released a new one. This picture features Dean O’Gorman and Aidan Turner Fili and Kili.

Fili and Kili are the two of the younger dwarves from the story. They are part of the royal family of Durin and raised under the tutelage of their uncle, Thorin Oakensheild. While they are both skilled fighters, they are inexperienced in life and not well traveled. The journey into The Lonely Mountain represents a great adventure to them both. However, they are in for far more than they ever could have imagined. 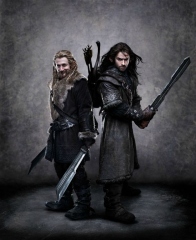