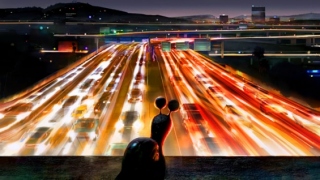 Courtesy of THR, here’s a new image from DreamWorks Animations next film “Turbo.” The film will be directed by David Soren (Merry Madagascar, a TV Christmas special), who is making his feature film directing debut. Soren will also co-write the script with Robert Siegel (The Wrestler) and Darren Lemke (Shrek Forever After).

The story follows “an ordinary garden snail (Reynolds) with dreams of racing greatness. His obsession with speed and all things fast has made him an oddity and outsider in the slow and cautious snail community, and a constant embarrassment to his careful older brother. When he is one day imbued with the power of amazing speed, he embarks on a quest that will see him racing in the Indianapolis 500.”