People can’t get enough of the news about the movies for ‘The Hunger Games’, so here’s a new pic that just hit the net of one of the movie’s stars.

There’s not too much news on this one. The official Facebook page for The Hunger Games just released a new photo of Liam Hemsworth from the movie. So far, the images they have shown off have been mostly of the drab, poverty stricken state of society in the film. We have yet to see the major sets and costumes mentioned in the book. 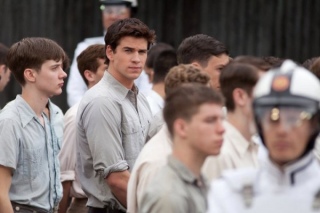 Here’s the official synopsis:
Every year in the ruins of what was once North America, the nation of Panem forces each of its twelve districts to send a teenage boy and girl to compete in the Hunger Games. Part twisted entertainment, part government intimidation tactic, the Hunger Games are a nationally televised event in which “Tributes” must fight with one another until one survivor remains.