Check out the new image of Tomar-Re, Green Lantern of Space Sector 2813 in all his CGI glory.

We’ve known for quite some time that Tomar-Re would make an appearance in next summer’s “Green Lantern” film and we even caught a glimpse of him in the recent “Green Lantern” trailer. But if you’ve ever wanted to get a better look at the guy, now’s your chance. CBM has posted a new image of Tomar-Re, Green Lantern of Space Sector 2813 in all his CGI glory, giving you a more detailed look at the alien character.

Yup, he’s got that creepy half bid half fish look down pat. 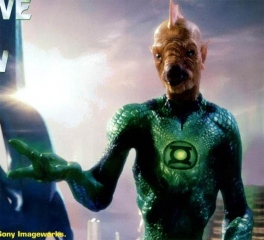