We aren’t kidding here… Major Spoilers ahead. We don’t know if this info or photo are real… but if they are… OMFG!

OK, We warned you before you clicked on it. There are major spoilers afoot here. We don’t know if they are real, but they are popping up around the net that they warrant some attention. If they are true than the person who is spreading them has a copy of the mid-season finale of “The Walking Dead.” They know what happens and they have an image (below)that gives up a major plot detail. First, we’ll post the official stuff and then we’ll give a long space so you can bail if you don’t want to read or see the spoiler material.

First up, AMC has released some official images from the mid-season finale of “The Walking Dead.” Here are the pics as well as the teaser for the episode: 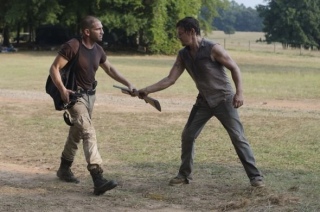 Episode opens with Glenn revealing the presence of the walkers to the rest of the group, who promptly proceed to freak out. Maggie becomes angry with Glenn for not keeping the secret and ruins his hat in retribution. Dale gives Glenn his trademark bucket hat as a replacement. Maggie later makes a plea to Hershel for the group to stay. She and Glenn also have an argument about the walkers, after which they eventually admit their feelings, kiss and make up.

Rick and Hershel argue, with Hershel demanding the group leave within a week. Rick uses the my-wife-is-pregnant card, but Hershel’s not persuaded. Shane also wants the group to get the hell out of there because of the walkers in the barn, but Rick uses the same excuse to cool him down. However, Shane then becomes convinced that Lori’s baby is his.

Dale takes off with Shane’s guns to hide them in the swamp. Shane tracks him down and demands he give the guns back. Dale points his rifle at him and threatens to shoot. However, he backs down at the last moment, since he has no wish to become like Shane: he reveals that he knows Shane shot Otis and lied about what really happened. Shane heads back to the farm with the guns.

Hershel has Rick help him and Jimmy try to fish some walkers out of a nearby pit of quicksand and lead them into the barn with snare poles. He says the group can stay on the farm if they agree not to kill the walkers. They arrive at the farm about the same time Shane emerges from the swamp and hands out guns to other members of the group…

Shane sees the snared walkers and goes berserk. He yells at Rick and Hershel as they guide the walkers towards the barn, with the rest of the group and people in the farm looking on. He pulls his sidearm and unloads it in the chest of one of the walkers, demanding to know “Could someone who’s alive just take that? Why is it still coming?” Hershel has no answer.

He finishes off the walker with a headshot, grabs a nearby pickaxe and breaks open the barn door. Walkers pour out, T-Dog, Daryl, Shane, Glenn, and Andrea form a line and open fire. Once the dust clears, one more walker emerges. Sophia. Rick finally steps up next to the others, pulls his six-shooter and kills Sophia with a shot to the head. End episode.” 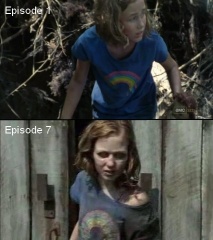