A new poster for Christopher Nolan’s mysterious “Inception” has been released. Ya, I still don’t know what this movie is about, but I know I’ll be watching it!

A new poster for Christopher Nolan’s mysterious “Inception” has been released. After some stills and teasers that make absolutely no sense, we finally get something concrete with this new MC Escher inspired poster featuring the cast that stars Leonardo Di Caprio and pretty much an all-star cast: Joseph Gordon-Levitt, Ellen Page, Marion Cotillard, Ken Watanabe, Tom Hardy, Cillian Murphy, Tom Berenger and Michael Caine

Having still knowing absolutely nothing about this movie, I want to watch it bad. Somewhere deep down I believe this will end up being the most talked about movie of the summer. If that’s true, hopefully it’ll tie us through until 2012 when Batman 3 gets released.

One last thing, a new trailer is also said to be coming very soon. “Inception” will drop this July 16. 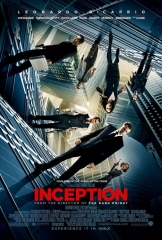