“You got a think in your butt.”

There seems to be a larger than normal amount of horror comedies coming out lately. We just had Hellbaby, and now we’ve got Bad Milo starring Ken Marino, Gillian Jacobs, Patrick Warburton, Mary Kay Place, Stephen Root and Peter Stormare.

Bad Milo tells the tale of man cursed with a demon in his butt… something anyone who has eaten too much Taco Bell can relate to.

Out of ideas and at the end of his rope, Duncan seeks the help of a hypnotherapist (Peter Stormare), who helps him discover the root of his unusual stomach pain: a pintsized demon living in his intestine that, triggered by excessive anxiety, forces its way out and slaughters the people who have angered him. Out of fear that his intestinal gremlin may target its wrath on the wrong person, Duncan attempts to befriend it, naming it Milo and indulging it to keep its seemingly insatiable appetite at bay. 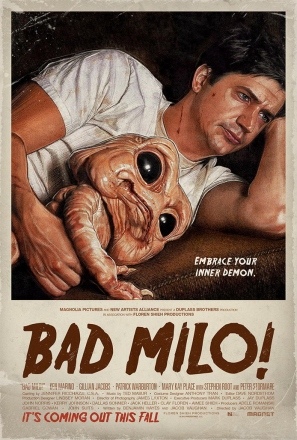