DreamWorks has released the first poster art for their upcoming CGI animated caveman film “The Croods.”

DreamWorks has released the first poster art for their upcoming CGI animated caveman film “The Croods.” Directed by Chris Sander (Lilo & Stitch, How to Train your Dragon), “The Croods” will feature the voice talents of Nicolas Cage, Ryan Reynolds, Emma Stone, Catherine Keener, and Cloris Leachman.

Here’s the official film synopsis:
The Croods takes us back to the beginning – to a previously undiscovered era known as the Croodacious – a time when Mother Nature was still experimenting and the flora and fauna we know today had yet to evolve. At the heart of this comically chaotic world is the Crood family, led by Grug, an over-protective father who, like all dads, is doing everything he can to hold his family together as the world around them changes at a dramatic pace. The Croods is scheduled for release in the spring of 2013.

This reminds me a bit of the “Flintstones” meets “Ice Age” and “Lilo & Stitch” is my absolute favorite Disney film so I’m extremely interested to seeing how it turns out. 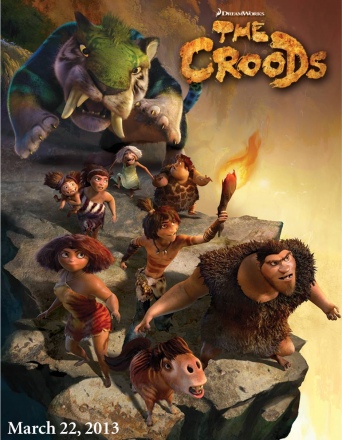