NSFW for language and a cod piece pistol.

A new red band trailer is out for Robert Rodriguez’s Machete Kills, the follow up to the cult hit, Machete starring Danny Trejo.

This time around they’ve added a lot more star power in the way of Charlie Sheen, Sophia Vergara, Mel Gibson, and Lady Gaga.

The new trailer doesn’t give a whole lot of story (not that this movie is really all that plot heavy anyways), but it does give a good look at pretty much everyone in the movie, including Vergara and her various mammary and genitally based weapons.

Official Synopsis:
In MACHETE KILLS, Danny Trejo returns as ex-Federale agent MACHETE, who is recruited by the President of the United States for a mission which would be impossible for any mortal man – he must take down a madman revolutionary and an eccentric billionaire arms dealer who has hatched a plan to spread war and anarchy across the planet. 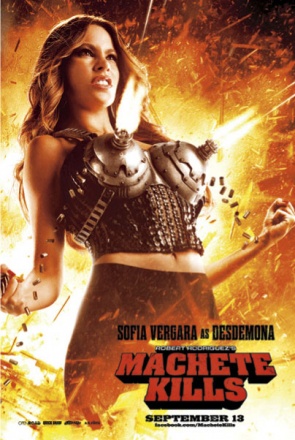