Dimension Films has released a new movie poster for the upcoming “Scream 4.”

Dimension Films has released a new movie poster for the upcoming “Scream 4.” I’m not sure if I should be getting excited for “Scream 4,” if anything it’s probably least anticipated sequels next to something like “Yogi Bear 2” or another rousing sequel to M.Night’s “The Last Airbender.” But don’t let me sway your excitement if you’re a close “Scream” fan. I suppose if anything I’m looking forward to seeing Courtney Cox and David Arquette fake coexisting together during press rounds.

Here’s the official synopsis for the Film:
Sidney Prescott (Neve Campbell), now the author of a self-help book, returns home to Woodsboro on the last stop of her book tour. There she reconnects with Sheriff Dewey (David Arquette) and Gale (Courteney Cox), who are now married, as well as her cousin Jill (Emma Roberts) and her Aunt Kate (Mary McDonnell). Unfortunately Sidney’s appearance also brings about the return of Ghostface, putting Sidney, Gale, and Dewey, along with Jill, her friends, and the whole town of Woodsboro in danger. 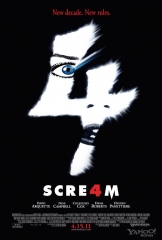