Filming in Pittsburgh to much fanfare, a slew of spoiler heavy new images from the set of “The Dark Knight Rises” have surfaced.

Filming in Pittsburgh to much fanfare, a slew of spoiler heavy new images from the set of “The Dark Knight Rises” have surfaced thanks to amateur paparazzi giving us our first full costume look at both Bane and the Dark Knight himself.

For the first time we get a clear look at Tom Hardy in his fill Bane costume. We also get to see him standing on top of the Batmobile and ripping up a photo of Harvey Dent. 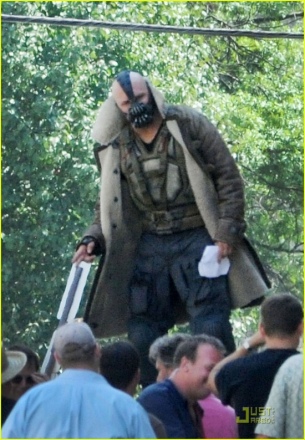 There’s also an awesome picture of Batman in his costume (which looks similar to what he wore in the sequel) elbowing Bane in the face! 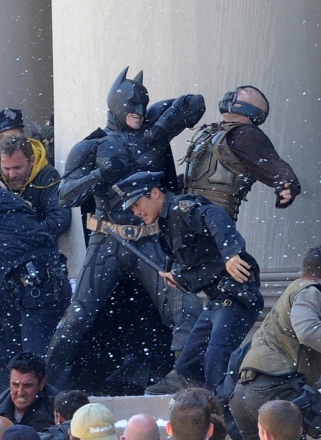 Below is a close up of the new Tumbler. I’m not sure why it has reverted back to cameo. But if I had to guess based on the storyline, it’s that Bane somehow uncovered the connection between Wayne Corp. and Batman and is trying to reveal who the Batman really is. The second video shows a huge riot outside the courthouse featuring mercenaries battling cops and Batman battling Bane!