The CW network has released this cool promo teaser teasing the classic Superman costume for the upcoming final season of “Smallville.” Fans have been waiting for a decade to see Tom Welling decked out in the iconic blue and red tights and the wait is about to be over, or at least that’s what the CW wants us to think. The “cape” tease shown in this is significant because although we don’t get to actually see Welling in the costume, we do see the reflection of Clark Kent in the uniform.

The tenth and final season of “Smallville” returns January 29th at 8/7c on The CW. 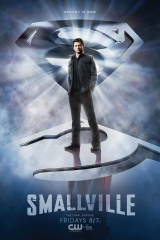