In the upcoming 80-page first issue scheduled to drop next year, fans will get an exclusive first look at the six-issue miniseries written and drawn by Frank Miller himself. 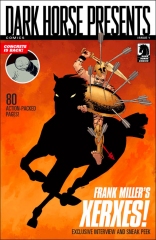 Every since Dark Horse Comics released a lithograph of “300” antagonist and Persian God-King Xerxes, there hasn’t been any new news in the way of the prequel. That is until now with the newly relaunching of Dark Horse Presents. In the upcoming 80-page first issue scheduled to drop next year, fans will get an exclusive first look at the six-issue miniseries written and drawn by Frank Miller himself.

The story is suppose to take place a decade before 300 and focus predominately on the king’s ascension to godhood in a world where the possibility is presupposed.

Here’s what Miller had to say about the character’s titular prequel at Hero Complex earlier in the year:

“The story will be the same heft as ‘300′ but it cover a much, much greater span of time – it’s 10 years, not three days,” Miller said. “This is a more complex story. The story is so much larger. The Spartans in ‘300′ were being enclosed by the page as the world got smaller. This story has truly vast subjects. The Athenian naval fleet, for instance, is a massive artistic undertaking and it dwarfed by the Persian fleet, which is also shown in this story. The story has elements of espionage, too, and it’s a sweeping tale with gods and warriors.”

No word yet as to when the actual film production will begin. Zack Snyder who directed the original “300” film had expressed interest in directing “Xerxes,” but is temporarily indisposed as he’s currently tackling directorial duties for WB/DC’s “Superman” reboot.