If you can’t get enough of the average bear, tune in tomorrow when WB releases the first movie trailer for Yogi.

Directed by Eric Brevig (Journey to the Center of the Earth) “Yogi Bear” stars Anna Faris (House Bunny), Dan Aykroyd (Ghostbusters) as the voice of Yogi and Justin Timberlake as Boo-Boo.

“Yogi Bear” or otherwise known as a possible abomination based on this poster, is set to hit theaters December 17th 2010. 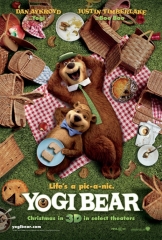