Olivia Thirlby (Juno, The Wackness) is set to join the cast in the new reboot of Judge Dredd starring Karl Urban as the judge, jury and executioner himself. 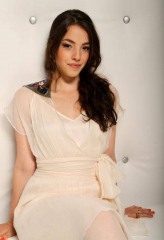 Olivia Thirlby (Juno, The Wackness) is set to join the cast in the new reboot of Judge Dredd starring Karl Urban as the judge, jury and executioner himself.

Thirlby is the second cast member to be confirmed for Pete Travis (Vantage Point)’s “Judge Dredd,” which despite the small $45 million budget, will be nothing short of awesome. Thirlby hasn’t been in much, but she’s been memorable in all her roles. In “Judge Dredd” she will play Cassandra Anderson, a telepathic rookie who shadows Dredd.

Additionally, “Judge Dredd” creator John Wagner believes the reboot will be better than the original after having read the script by Alex Garland (28 days Later):

While I can’t go into detail about the content I can say that it’s high-octane, edge of the seat stuff, and gives a far truer representation of Dredd than the first movie. I hated that plot. It was Dredd pressed through the Hollywood cliché mill, a dynastic power struggle that had little connection with the character we know from the comic.

This is certainly great news if Wagner himself gives it a thumbs up! While Judge Dredd may be overshadowed by other upcoming superhero comic book movies such as “Thor,” “Captain America,” “Spider-Man 3D” or “Green Lantern,” it’s secretly one of the films I’m most looking forward to. And you should too!