Universal Pictures has officially greenlit the third film in director Edgar Wright’s trilogy of comedies. The final installment, entitled The World’s End, will follow the success of 2004’s Shaun of the Dead and 2007’s Hot Fuzz.

We’ve had some talk about this movie for a while now and we have really be hopping that it was going to happen. Today, Universal made it offical at SDCC. We will get the final film in the Edgar Wright, Simon Pegg and Nick Frost Trilogy. Check out the official announcement and the special poster released in celebration at Comic Con. 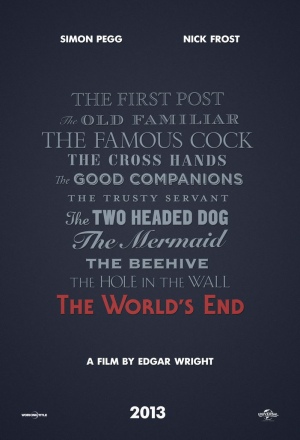 LOS ANGELES, CA, July 13, 2012—Universal Pictures has officially greenlit the third film in director Edgar Wright’s trilogy of comedies. The final installment, entitled The World’s End, will follow the success of 2004’s Shaun of the Dead and 2007’s Hot Fuzz. Wright is currently in pre-production on the film, which will begin shooting this October in the U.K. Simon Pegg, who co-wrote the script with Wright, will join forces once again with Nick Frost to star. Working Title’s Eric Fellner and Tim Bevan will produce with Nira Park of Big Talk Pictures. The official teaser poster for the movie was released today at Comic-Con.

As with the first two movies in the trilogy, Focus Features will distribute The World’s End domestically and Universal Pictures will handle international distribution.

About The World’s End

20 years after attempting an epic pub crawl, five childhood friends reunite when one of them becomes hellbent on trying the drinking marathon again. They are convinced to stage an encore by mate Gary King, a 40-year old man trapped at the cigarette end of his teens, who drags his reluctant pals to their hometown and once again attempts to reach the fabled pub – The World’s End. As they attempt to reconcile the past and present, they realize the real struggle is for the future, not just theirs but humankind’s. Reaching The World’s End is the least of their worries.

Focus Features (www.focusfeatures.com) is part of NBCUniversal. This worldwide studio makes original and daring films that challenge the mainstream to embrace and enjoy voices and visions from around the world that deliver global commercial success. Focus Features is celebrating its 10th Anniversary in 2012.