The much hyped movie returned to Comic-Con today with new footage and the reveal everyone’s been waiting for… yes, there will be other monsters

Don’t call it a come back, but Warner Bros. and Legendary Pictures are planning to bring Godzilla back to the screen and the much hyped movie returned to Comic-Con today with new footage and the reveal everyone’s been waiting for – who Godzilla will stand toe and toe against in the new film. At the panel, director Gareth Edwards was joined on stage with Aaron Taylor-Johnson, Elizabeth Olsen, and Bryan Cranston to talk about new take on the legendary Japanese monster.

According to Edwards, he had just completed filming two days ago and the film will not simply be a monster movie. He was given a lot of creative freedom to reinvent Godzilla and believes that there needs to be a fine balance between humanity and the monster. It’s expected that there will be more of a human element to the film than previous Godzilla films. But at the same time, he just wants maintain the
Toho legacy, so it was a high pressured task bringing Godzilla to life.

After the panel, fans were treated to some new footage which began with a world in peril and a city in rumbles. We see soldiers and what appears to be the very first monster aside from Godzilla. We don’t actually get to see the monster, but it may be something insect like, maybe Kamacuras, from the 1967 “Son of Godzilla” movie? It’s being hunted by the military helicopters… and then out of no where we’re introduced to Godzilla! We don’t get to see Godzilla’s face, but he is immediately recognizable and appears similar to his more modern Toho incarnations. They’re about to do battle and the teaser ends. 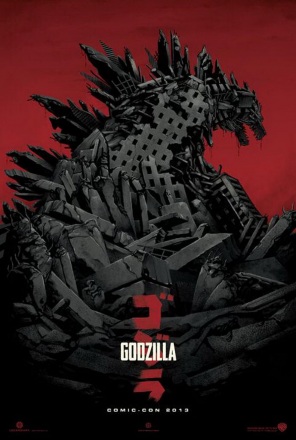