SDCC 2013: Stallone and Schwarzenegger To Host Screening Of THE ESCAPE PLAN

Find out how to win tickets to the screening after the jump!

Wanna see the new Summit film, The Escape Plan, starring Stallone and Schwarzenegger? Well, if you are headed to San Diego for Comic Con next week, it looks like you’ll have a shot to not only see it, but see a screening hosted by the action hero legends behind it.

Summit Entertainment, a LIONSGATE company, will debut the first lead pairing of action legends Sylvester Stallone and Arnold Schwarzenegger in the film ESCAPE PLAN at Comic-Con 2013

Passes for the screening will be available through online giveaways, at the Summit Booth on the convention floor and via giveaway outside the screening location, the evening of the event, while supplies last.

The fan line will open outside the theater (701 5th Ave.) at 5:00pm. Here fans will have another chance to score a ticket to the special screening and welcome Sylvester Stallone and Arnold Schwarzenegger when they arrive on the red carpet.

Convention Floor Booth – Summit Entertainment’s booth located within the Grand Hall will highlight ESCAPE PLAN. Exclusive premium promotional items will be distributed to the attendees walking the convention floor and visitors will have the opportunity to win fan screening passes throughout the day on Thursday, July 18th.

One of the world’s foremost authorities on structural security agrees to take on one last job: breaking out of an ultra-secret, high-tech facility called “The Tomb.” Deceived and wrongly imprisoned, Ray Breslin (Sylvester Stallone) must recruit fellow inmate Emil Rottmayer (Arnold Schwarzenegger) to help devise a daring, nearly impossible plan to escape from the most protected and fortified prison ever built.

Synopsis:
Ray Breslin is the world’s foremost authority on structural security. After analyzing every high security prison and learning a vast array of survival skills so he can design escape-proof prisons, his skills are put to the test. He’s framed and incarcerated in a master prison he designed himself. He needs to escape and find the person who put him behind bars. 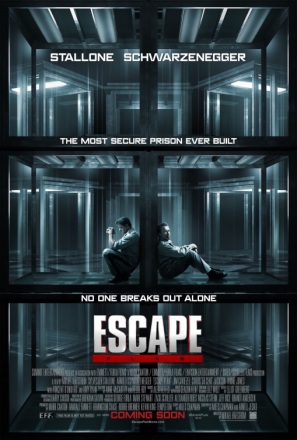