In the middle of a fight scene, Pegg, busted his hand, but they didn’t have the shot they wanted yet, so he kept going for another six takes!

While The World’s End is not one of the biggest movies at Comic-Con this year, it is definitely one of the ones that holds a special place in the heart of most of the show’s attendees. As the final chapter in Edgar Wright, Simon Pegg, and Nick Frost’s Cornetto trilogy, it wraps of nearly a decade of great movies that included Shaun Of The Dead and Hot Fuzz.

Wright, Pegg, and Frost were all on stage this morning for the panel. While they opted not to show any new footage from the film (just the trailer and the featurette about the trilogy), the panel was full of laughs and a lot of great conversation about movie, everything else they’ve done together and the prospect of what they might do together in the future.

About his character, Simon Pegg mentioned that his character is equal parts villain and hero in the movie, and that he lives a life stuck in the the 90’s while all his friends have grown up.

In regards to the Corentto trilogy, Nick Frost and Simon Pegg mentioned that they wanted to make sure they played different types of roles in each movie. They also explained why it’s called the Cornetto Trilogy. it turns out, in college, Cornettos were what the three of them used as hangover remedies. That carried over to a scene in Shaun of the Dead when Simon Pegg left the house to go and buy a Cornetto.

There was a lot of reminiscing about working together in past films. They mentioned wanting to work together again, and Wright said that he was going to put them both in a spin-off of Ant Man called Abdo-Man and The Mighty Thorax.

Surprisingly, they admitted that they don’t really do any improvisation in their films. They get all their improv written into the script.

There was also some talk about Simon Pegg getting injured during the filming. In the middle of a fight scene, Pegg, busted his hand, but they didn’t have the shot they wanted yet, so he kept going for another six takes!

with the three of them on stage, the question of Spaced had to come up, because everyone wants there to be more of it. Sadly, they all pretty much said it wasn’t going to happen. 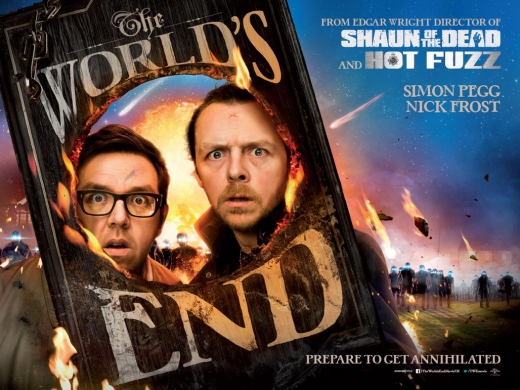